“Japanese Film Festival” sponsored by Consulate General of Japan in Edinburgh was kicked off. Anime “Junod” was screened on January 26, 2018 as the first screening.

Favorable comments were heard from approx. eighty students and citizens who came to see at Edinburgh University such as “extremely impressed” and “Fabulous story and animation pictures”. 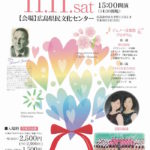